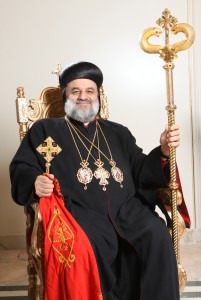 On March 21, 2014, Patriarch Ignatius Zakka I Iwas died after a long illness. Following his death, the Holy Synod of the Syriac Orthodox Church of Antioch was convened to elect a successor. The synod was held at St. Jacob Baradeus Monastery in Atchaneh, Lebanon, presided over by Mor Baselios Thomas I Catholicos of India and Mor Severius Jamil Hawa Archbishop of Baghdad and Basra and Patriarchal Locum Tenens. The synod elected Cyril Aphrem Karim to be the 123rd successor of St. Peter in the Apostolic See of Antioch. He was enthroned on May 29, 2014, at St. Ephrem’s Monastery, Maarat Saidnaya, near Damascus, Syria. Baselios Thomas I oversaw the ceremony. Karim took the patriarchal name Ignatius, replacing his episcopal name Cyril, and, being the second patriarch to bear the monastic name Aphrem (the first being Ignatius Aphrem I Barsoum), his name became Ignatius Aphrem II. Unlike his immediate predecessors, but following older convention, Aphrem II chose not to use his family name, Karim, in his official title. 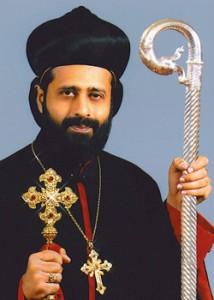 His Grace Mor Sevarios Kuriakose, ordained Metropolitan for the Knanaya diocese by the Patriarch of Antioch Moran Mor Ignatius Zakka I on 15th January 2004, as the fourth Metropolitan of the Knanaya diocese after its formation in 1910. The Consecration ceremony of the Metropolitan was at the St.Peter and St.Paul Cathedral in the Monastery of St.Aphrem at Maarrat Seydnaya, Damascus, Syria. His Grace assumed the seat following the demise of the Chief Metropolitan of the East, Mor Clemis Abraham, in September 2002 at the culmination of one of the longest reigns in Indian Christendom. 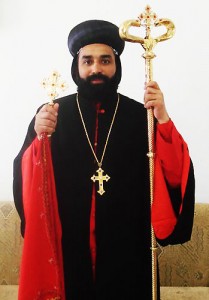 Mor Silvanos Ayub was elevated to high priest-hood on June 11, 2008 by His Holiness Moran Mor Ignatius Zakka I Iwas, the Patriarch of Antioch and All the East and the supreme head of the Universal Syriac Orthodox Church of Antioch.

Mor Silvanos Ayub (formerly known as Rev. Fr. Job Thottathil or Joby Uthuppan) was born on April 18, 1972 as the son of Uthuppan Kandallur and Mariyamma Uthuppan. After attaining Commerce degree from the Calicut University in Kerala, he joined Serampore College, Calcutta, India and later the St. Aphrem Theological Seminary in Damascus, Syria. On successful completion of his theological studies from both the institutions he was ordained priest on August 6, 1999 and was since then serving the Knanaya churches at London, Manchester, Birmingham and Bristol in Great Britain. In March 2008, the Knanaya Syrian Christian Association held at Mor Ephraim Seminary in Chingavanam, Kottayam choose Rev. Fr. Job Thottathil and Fr. Kuriakose Kolath as the new auxiliary metropolitans for the Archdiocese and accordingly both were raised to the order of Ramban in May 2008. The Metropolitan ordination of Rev. Fr. Job Thottathil was held at the St. Aphrem Church at Ma`arat Seydnaya, Damascus, Syria in June 11, 2008.

In May 2009, Ayub Silvanos was elevated by the Patriarch of Antioch to the position of Archbishop of the Knanaya Archdiocese for the North America, Canada and Europe Region. 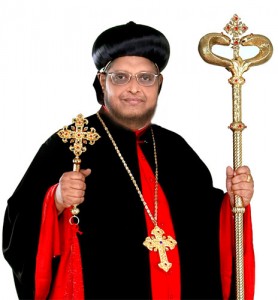 His Holiness the Patriarch of Antioch Zakka Iwas I ordained V.Rev. C.T.Kurian Ramban as the new Auxiliary Bishop for the Knanaya Archdiocese. His Grace will assume the name Kuriakose Mor Gregorios. Ordination ceremonies took place on Feb 2, 2007 in Damascus. Hundreds of Knanaya faithful from Kerala, USA, Middle East and other parts of the world attended the enthronement ceremony. Knanaya Archbishop Kuriakose Mor Severios along with several other bishops and dignitaries were also in attendance for this landmark ceremony. H.G. Kuriakose Mor Gregorios is the second Assistant Bishop for the Knanaya Archdiocese. 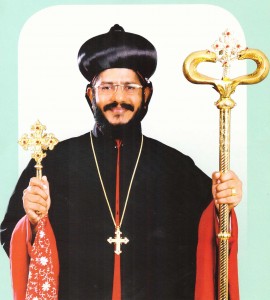 Mor Ivanios Kuriakose, the auxiliary bishop of the Knanaya archdiocese was elevated to high priest-hood along with Mor Silvanos Ayoub on June 11, 2008 by His Holiness Moran Mor Ignatius Zakka I Iwas, the Patriarch of Antioch and All the East and the supreme head of the Universal Syriac Orthodox Church. The consecration ceremony was held at the St. Peter & St. Paul’s Patriarchal Cathedral at Marrat Sayyidnaya, Damascus, Syria. Mor Ivanios Kuriakose (formerly known as Rev. Fr. Kuriakose Kolath) was born on June 9, 1964 to Kolath K G Abraham and Thankamma. He attained his degree and post-graduation from the Kerala and M.G. Universities respectively. Later he joined the Vidiya Jyothi Catholic seminary, New Delhi. On August 15, 1993 the former Metropolitan of the Archdiocese, H.E. Mor Clemis Abraham ordained him Kassisso (full priest) at the St. George Church, Neelamperoor. 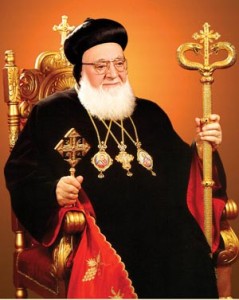 His Holliness Moran Mor Ignatius Zakka I Iwas, Syrian Orthodox Patriarch of Antioch and all the East, Supreme Head of the Universal Syrian Orthodox Church was born on April 21, 1933 in Mosul, Iraq. He became a monk on June 6, 1954 then later became a priest on November 11, 1957. He was consecrated Metropolitan in Mosul, Iraq on November 17, 1963. His Holliness then was transfered to Archdiocese of Baghdad in 1969. He became the Patriarch of Antioch and all of the East on September 14, 1980.

The 122nd successor to St. Peter in the Apostolic See of Antioch, completes 25 years in the Patriarchal See on the day of the Feast of Holy Cross, 2005. The Universal Syrian Church with its flocks spread over many nations, celebrates this unique historic occasion, of His Holiness’s Silver Jubilee of the Patriarchal enthronement, with great fervor and enthusiasm. It was on September 14, 1980, the Holy father was enthroned as the Patriarch of Antioch and All the East and the Supreme Pontiff of the Universal Syrian Orthodox Church. He is one of the very few primates of the Syrian Church who have been in the Patriarchal office for an entire quarter of a century. As a true Shepherd, His Holiness has led the Holy Church to greater glories in these years of his Patriarchal See. 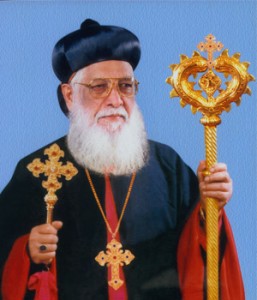 Mor Clemis was born into the Vayala family in Ranni, on April 22, 1918 as the sixth offspring of Mr.  & Mrs. Idiculla Kochidiculla. His brother Vayala Idiculla was a well-known political leader and a freedom fighter. Young Abraham’s liking was to be a politician, but God had other plans for him. Like Moses, when the Knanaya people had no bishop for a long period of time, God called him to be their Shepherd. Mor Clemis joined the church as a deacon at a young age. A graduate in Theology and Political Sciences, Mor Clemis studied at Seminaries in Manjinikkara, Alwaye, Mosul, Homs, and Union Theological Seminary in New York. Consecrated Knanaya Diocesan Bishop in 1951, Mor Clemis served that office for 52 years. He was indeed a good shepherd and he tended his flock with diligence and faithfulness

Mor Clemis established himself as the veritable leader of not only the Knanaya Community but also of the Malankara Church. As a result he was elected as the Malankara Metropolitan in 1957.

In 1982, recognizing his leadership and wisdom, His Holiness the Patriarch of Antioch and all the East, decorated Mor Clemis with the highest honor a bishop can receive, the title of “Kubernithi Hakimo” which means ‘Wise Captain.’ Again in 1989 His Holiness bestowed on Mor Clemis the position of “the Chief Metropolitan of the East” recognizing his continued contributions to the whole Indian Christian Community. It is a position similar to that of the Catholicose.

Mor Dioskoros Thomas was ordained as Metropolitan at Jerusalem in 1926. Initially he assisted Mor Severious Geevarghese Metropolitan and took over the administration of the diocese at the demise of Mor Severious. He was from the famous Thervaladi descendants of the Knights of Thekkumkoor royal family. His mother belonged to the famous Ottathycal family at Chingavanam, where his father was resided, as there were no male members there.  In his administrative period the ‘Patriarchal Bull No. 42 was issued by “Patriarch Elias III”. The Bull proclaimed that Knanaya diocese shall always be directly under the holy throne of Antioch. Construction of the Ephraim Seminary building was completed during his time. The Vanitha Mandiram (Kurichy) and Mor Severious High School (Ranny) were established during his time. Unfortunate Mor Diascoros joined Roman Catholic Church in November 1939. 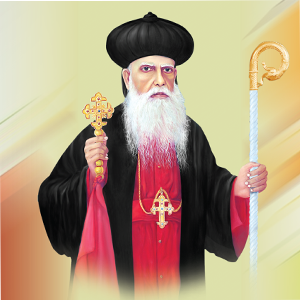 Mor Severios Geevarghese was born in 1851 to Kasiso Philipose of the Edavazhickal family, the vicar of Kottayam Valiyapally, and Kunjachi. After his primary education Geevarghese prepared to become a priest. He was the 10th priest of the famous Edavazhickal family that has produced many gifted men, most well-known among whom is the Church historian E.M. Philip. On 31st August 1910, Patriarch Mor Ignatius Abded Aloho ordained Fr. Geevarghese Edavazhickal as the first Knanaya Bishop with the name Mor Severios. Around that period, the reformation movement that was very active in Malankara rocked the Knanaya Community also. At Kottayam, Kallissery and Ranny many faithful of the Knanaya community along with some priests joined the new movement and created a rift in the churches.

“The Knanaya Association” rules were compiled in 1918 which later became the guideline for the present constitution of the diocese. Mor Severios passed away on June 11, 1927 and was laid to rest at the ancient Kottayam Valiya Pally.